Dumplings can be found in many corners of the world, and every foreigner will admit that only in Poland they taste really special. Who doesn't love freshly cooked dumplings? They are taken care of by everyone - children, teenagers, adults. Russian dumplings, with strawberries, mushrooms or meat dumplings. Each of them is wrapped in a soft cake.... It is in perfect dough that the secret of these delicious homemade delicacies lies.

A few words about dumplings...

Pierogi have probably been known in Poland since the 13th century. They were presumably brought from the Far East through Ruthenia. In the past, dumplings were prepared exclusively on the occasion of holidays and each holiday had its own dumplings, which differed in shape and stuffing, e.g. "Sweet dumplings" and "Sweet dumplings": "chickens' - large wedding dumplings with different fillings, always with chicken meat; 'knysze' - mourning dumplings, served in style; 'koladki' - baked in January during the caroling period; 'hreczuszki' - made of buckwheat flour; 'sanieżki' and 'socznie' - sweet dumplings usually baked for name-day celebrations.

Dumplings still make a furore to this day. Do you love dumplings, but according to your family this dish blows boredom? Surprise your loved ones and prepare an original filling that may hide this seemingly familiar and homely dish.

1. dumplings with spinach - sift the flour with a pinch of salt, add half a glass of hot water and make a homogeneous dough. Set aside for half an hour, cover with a damp, clean cotton cloth. Thaw the spinach on the strainer, pouring it with boiling water. Crush garlic, grate or chop finely. Dice the onion, add thawed spinach, minced garlic and spices and meat, mix and stew over low heat. Ready-made stuffing pass through the machine or mix. Roll out the dough on a flour-spreading board, cut out small circles, apply to each small portion of filling and glue. Cook in large quantities of salted water for about 5-6 minutes. Serve best with butter or pork greaves with onion.

Chinese dumplings - Wonton, guo tie and jiaozi are eaten in China. These are small dumplings with quite exotic for us stuffings. They are indispensable snacks at parties. They are not, as in Poland, lunch dishes. Wonton is stuffed with oysters, shrimps or pork, guo tie stuffing with pork meat, shrimps and chives. Beijing meat and cabbage, on the other hand, is a filling found in jiaozi. To prepare a guo tie, you need a guo tie: 25 dag raw chopped shrimps, 25 dag ground pork, a spoonful of soy sauce, a spoonful of sesame oil, a spoonful of rice wine, a spoonful of chopped chives, a spoon of grated ginger. Combine and mix all ingredients together. 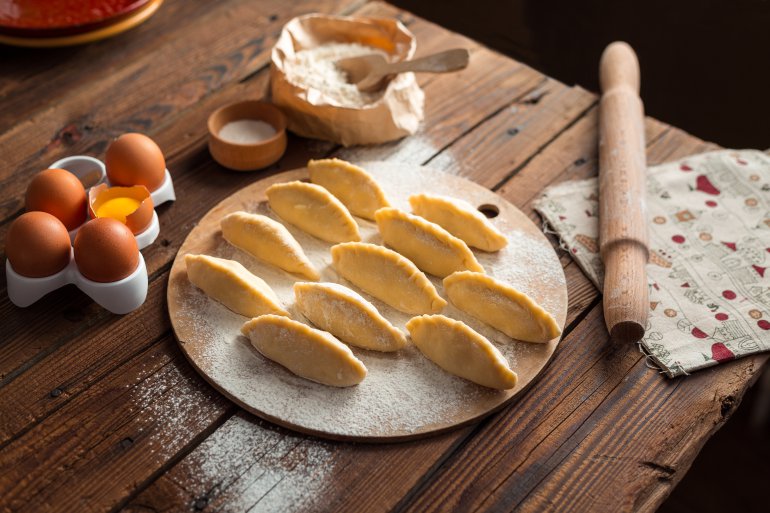 3. chocolate dumplings with white chocolate filling, raspberries and fresh mint - mix flour with cocoa and salt, add one whole egg and 1 egg yolk, oil and gradually add water, knead smooth elastic dough. Roll out the dough as thinly as possible and cut out rings in it. Finely chop chocolate and mint leaves. Spread portions of chocolate, mint and raspberry on the edges of the dough with egg whites and sprinkle the dumplings. In a large pot it boils water with a little bit of salt, when the water starts boiling, put the dumplings into it and cook for about 5 minutes. Drain the dumplings, place them on a plate in the middle and put a scoop of vanilla ice cream in the middle and decorate with mint leaves.

Philippine dumplings with chicken - with two glasses of flour, a teaspoon of baking powder, a teaspoon of salt, two teaspoons of oil, two tablespoons of vinegar, 2 tablespoons of butter and eggs, prepare the dough, then cover with a cloth and set aside. Then roll out thickly and cut into squares. Peel the chicken from the skin, remove bones and cartilage. Mince the meat, mix with egg and green peas, season to taste with salt and pepper. Apply halfway through the squares after a portion of stuffing, cover the rest. Glue them together only at the corners. Heat the oil in a wide saucepan. Throw in the dumplings, fry them until they brown, often turning. Pick up with a strainer spoon and place on paper towels to drain the fat. Serve like shashlikes stuffed in pairs on decorative swords.

5. dumplings with lentils - in ancient Greece, Rome and Egypt lentils were the basis of nutrition, while in most Polish homes its taste remains unknown to this day. Prepare the bouillon in 400 ml of hot water, boil the lentils in it until a thick pap is formed. Dissolve butter, add curry and paprika and crushed garlic, fry and add to the lentils, let it cool. Knead the dough with flour, eggs, oil and about 3/4 of a glass of lukewarm water. Roll out, cut out the rings with a glass, apply portions of stuffing and glue together the dumplings. Cook in salted boiling water 2-3 minutes after flowering. Put it on fire and stir until it boils. Cook over low heat for 3 minutes, stirring frequently. Serve the dumplings right after cooking with mushroom sauce.